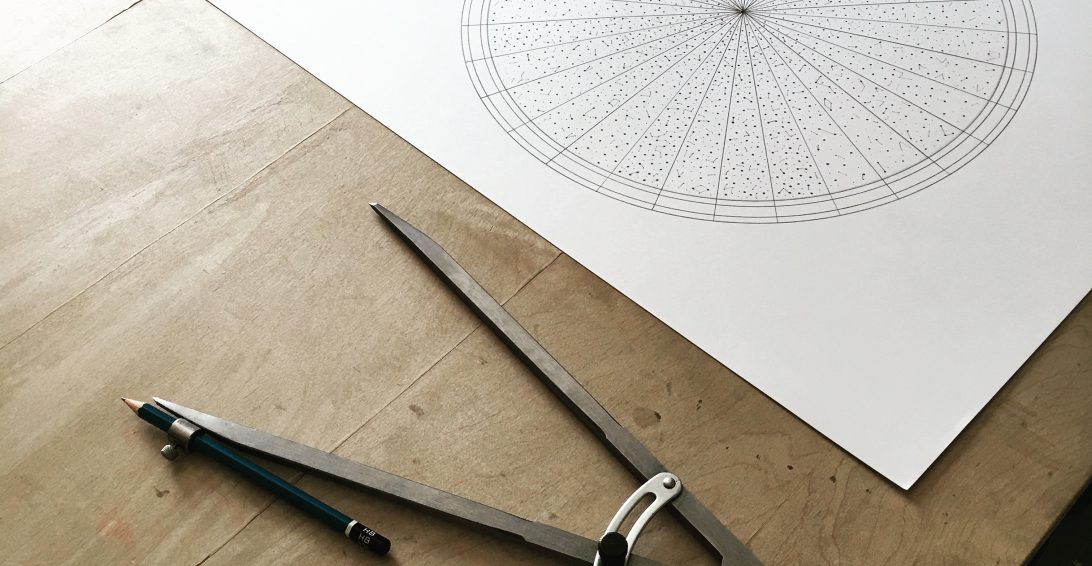 For this first blog post, I want to lift up the curtain and show some of the work behind the work I’ve been doing on the gun violence projects.

On March 8, I shared this on my personal Facebook page: 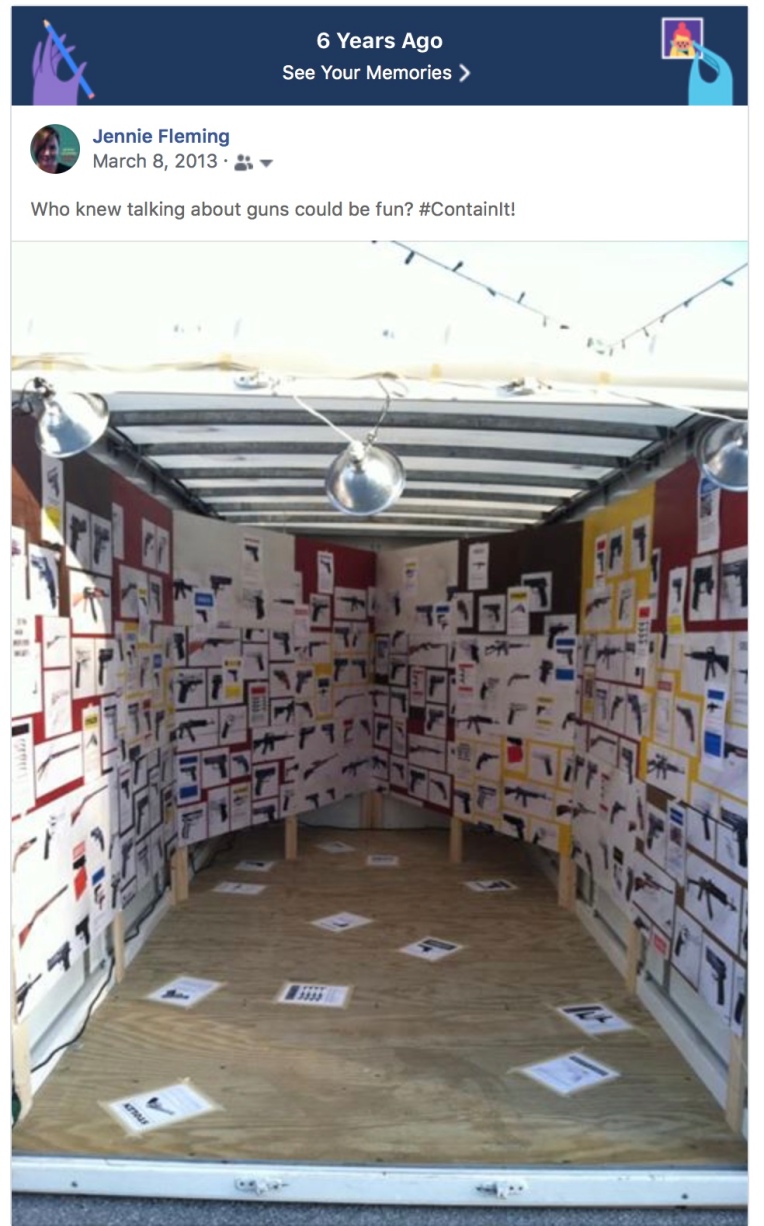 “Six years ago I had a wild idea to do an installation on stolen guns for the Contain It! exhibit at the Dunedin Fine Art Center in Florida (Thank you so much Chris for giving me the freedom to do this). I didn’t realize at the time how that impulse would change my art practice. For this installation, I wanted to raise awareness regarding the prevalence of guns stolen from people’s private homes and vehicles, guns that are then often used later to commit crimes. Guns that are known to be in the homes or vehicles and left in easily accessible locations; guns that are more likely stolen by family members, neighbors, and children’s friends. I had a vested interest in the topic, as it was a gun stolen by a teenager from a friend’s house party that became the weapon he used to rob the diner where I worked many years ago. The teenager easily took the gun from the home, and later used it to take the lives of our manager and assistant manager (more than my coworkers, they were my work family, a friend).

I did have fun that exhibit weekend even though I was not fully prepared for the Pandora’s box I opened; visitors to the exhibit were surprised by the content of my shipping container. Some shied away just at the sight of gun images and didn’t enter-they vocalized their distaste or fear and scurried away. Others were immediately defensive, their hackles raised as they prepared for a fight until they talked to me about the exhibit. Most were shocked at how many news reports I was able to gather in the few months leading up to the exhibition. As they took the time to read the circumstances, they shared their disbelief and anger at the stories of outright carelessness. There was also the realization that we can be too trusting, that gun owners have a greater responsibility to keep their weapons secure.

On this “Do You Know Where Your Guns Are?” anniversary, I ask gun owners to consider their storage habits. Are you doing everything you can to keep your weapons out of the hands of others? Who knows you own guns? Who knows where and how you store them?

While I am not actively tracking stolen guns now, I still see many news reports that mention guns stolen from private individuals used in later crimes. Even more heartbreaking is the almost daily news stories of children finding or retrieving guns from shelves, purses, drawers, and accidentally shooting themselves, or other children and family. We cannot continue to ignore the alarming regularity of news reports of children and teenagers taking their parent’s guns to school with the intent to harm others.

In the last two years, I have been doing more research on gun violence and I have other projects in development. I’ve been trying to simultaneously comprehend the big picture- the daily/monthly/yearly numbers of those killed or injured; and the details- who, when, where, why (the how is known). It’s been an emotional roller coaster. Some days I am simply overwhelmed with anger and sadness. I plan to share more of that work soon.”

Now it is June 13, and I am sharing more of that work.

I moved on for a time after the 2013 project, but the headlines kept coming. “Community members shocked over rare murder-suicide.” “What we know and don’t from Thursday’s domestic shooting in Wilmington.”  The headlines led me to statistical research, to understand the issue at the macro and micro levels. 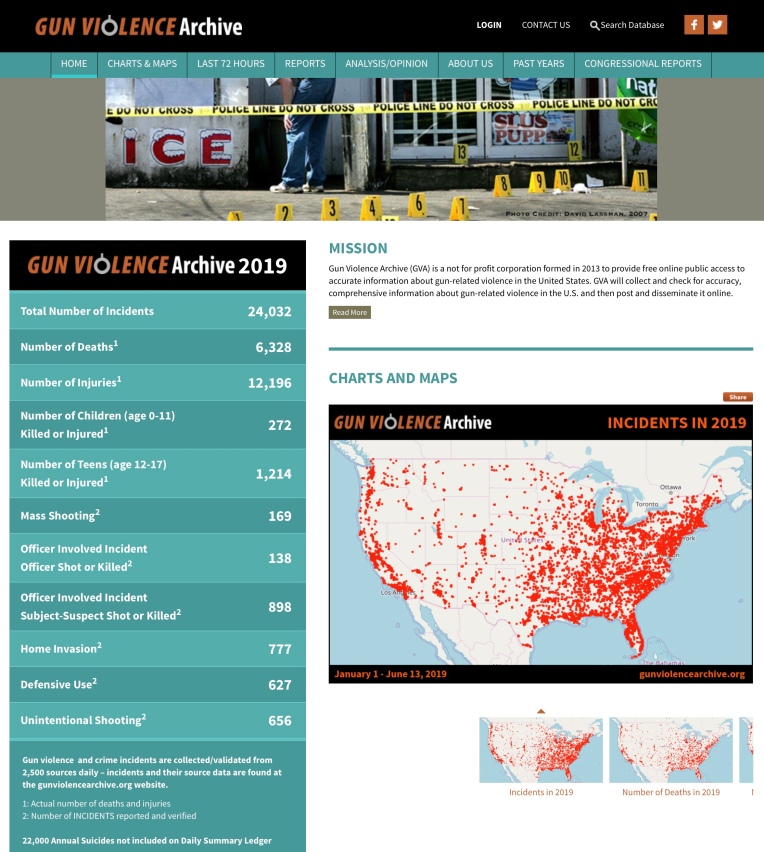 Gun Violence Archive (GVA) is a not for profit corporation formed in 2013 to provide free online public access to accurate information about gun-related violence in the United States. GVA will collect and check for accuracy, comprehensive information about gun-related violence in the U.S. and then post and disseminate it online.

Beginning in January 2017, I started tracking the daily incidents of gun deaths at the GVA. I learned all too quickly that the data available to the public starts to disappear after it reaches 18 pages of 25 records (450 total records displayed, roughly 12-13 days of death incidents and 7-8 days of injury incidents). The downloadable spreadsheet available to the public contains very basic information: incident date, the address, city or county, state, and the number killed and/or injured. It is the incident reports that provide the most detail with locations, participants, notes, and source links. I download the spreadsheet and then look at each death incident report for gender and age of victims and suspects, and the details of the incident if known (suicide, homicide, accidental, robbery, home invasion, drive by, road rage, domestic violence, officer involved, etc.). I learned to collect data about six to seven days behind; some incidents were not reported immediately, most had little initial information and later reports were more forthcoming, sometimes the victims died later from their injuries and the statistics would change. 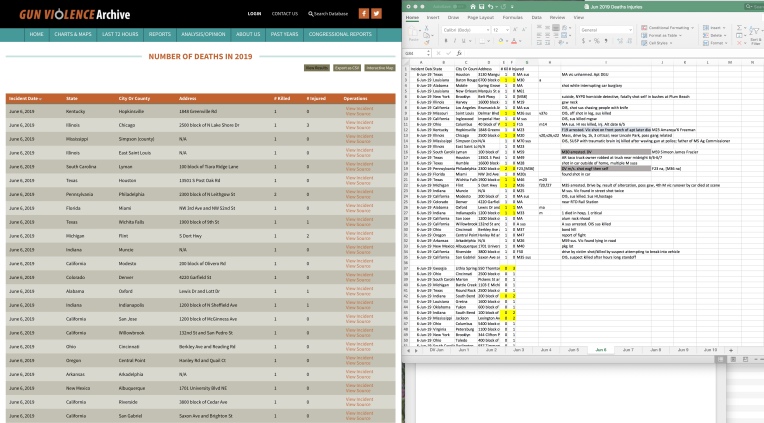 [screenshot: GVA website on the right, my data sheet with notations and color coding on the right.]

I spend anywhere from one to two hours collecting data each day. The weekdays are shorter, the weekends are always longer with almost twice as many incidents; summer days have more incidents than winter, holidays are longer with a higher emotional drain.

For the “Silenced: Records Series,” I use the GVA information to create temporal data portraits in a series of mixed-media drawings: Silenced: Daily Records 2017; Silenced: Monthly Records 2018; and Silenced: Yearly Records, 2014-2018. It is one experience to see daily headlines in local or national news—you get a sense of daily threat but not the totality, and another experience to look at a database with lists of incidents—but still not get a sense of the magnitude of the problem. The “Silenced: Records Series” are my initial attempts to visualize the magnitude—the daily, monthly, and yearly cost of gun violence in the United State. I am still searching for ways to visually “get a grip” on the cost of gun violence to our society, to our psyches, to our souls.

In 2019 I returned to the headlines, focusing on how news media and government agencies are telling the stories of gun-related domestic violence incidents.

In addition to recording data and collecting news reports from the Gun Violence Archive, I also get daily Google Alerts that hit on my designated search terms; in this instance “shooting” and “domestic.” Here’s a screenshot of my email from one day: 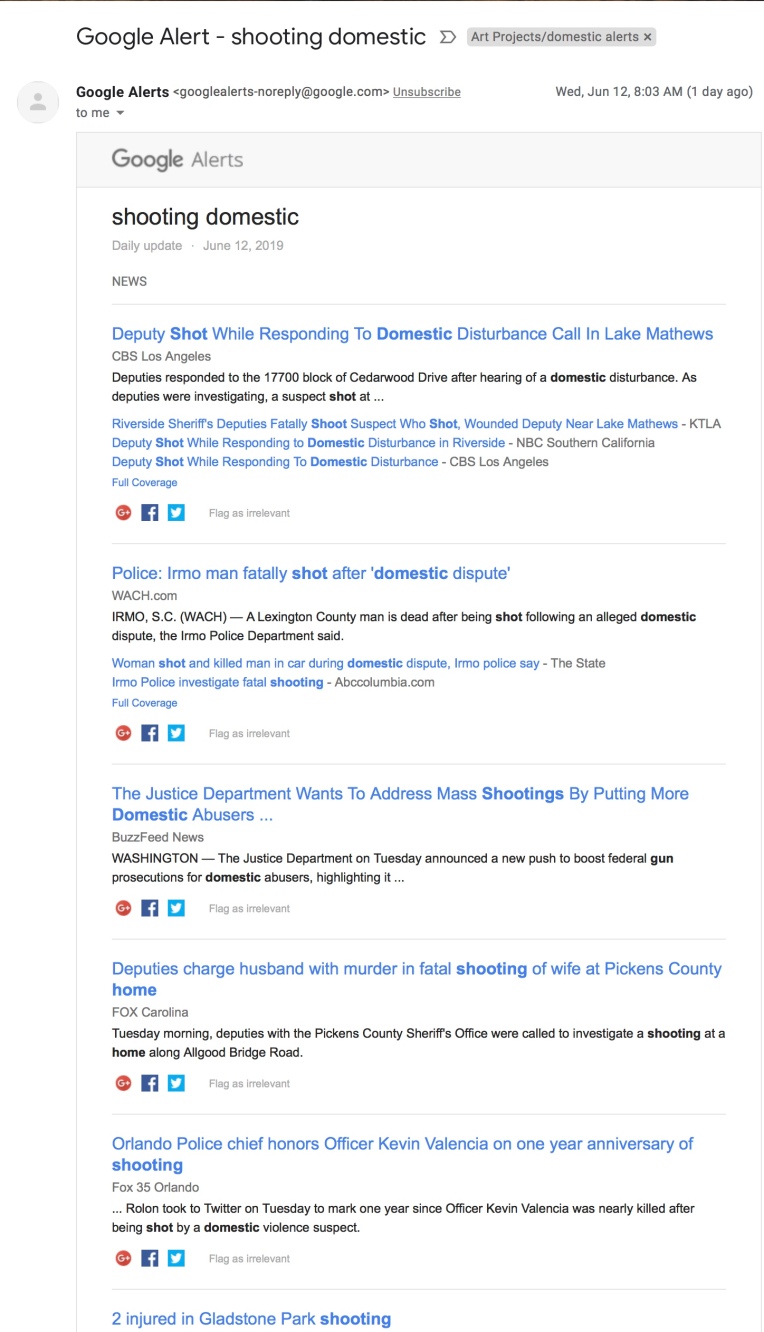 That is just 6 of the 23 ‘big hits’ (not including the related headlines), and the message was clipped so when I view the full message in the browser there are 35 headlines (again not counting smaller related links). This is not a perfect search; some links are not relevant, there are often duplicates, but it is the one of the best tools I have for following a story beyond the initial incident to the arrests, trials, sentencing, probation hearings, etc. It is also a useful way to find essays and opinion articles, as well as pending legislation.

Other helpful sources of information are groups and nonprofit organizations on social media, to name just a few:

The Trace: Reporting on Guns and Gun Violence in America

It Takes Us: Stories of Gun Violence from Across America

“Started in early 2017 by registered nurse, domestic violence and sexual assault survivor Dawn Wilcox, Women Count USA began as a way to document women and girls murdered by men in the United States. Dawn felt women should be remembered as more than statistics and is amassing data in an effort to obtain an accurate count of how many women have died as a result of male violence since 1950, as well as documenting unsolved murders of women and girls. She also challenges victim-blaming media narratives of female murder victims and problematic language used to report domestic violence homicides and is developing guidelines for use by journalists and citizen reporters on best practices.”

Women Count USA has become a valuable source of information for my current projects, and Dawn Wilcox is an inspiration as she turns her personal story into advocacy for others. 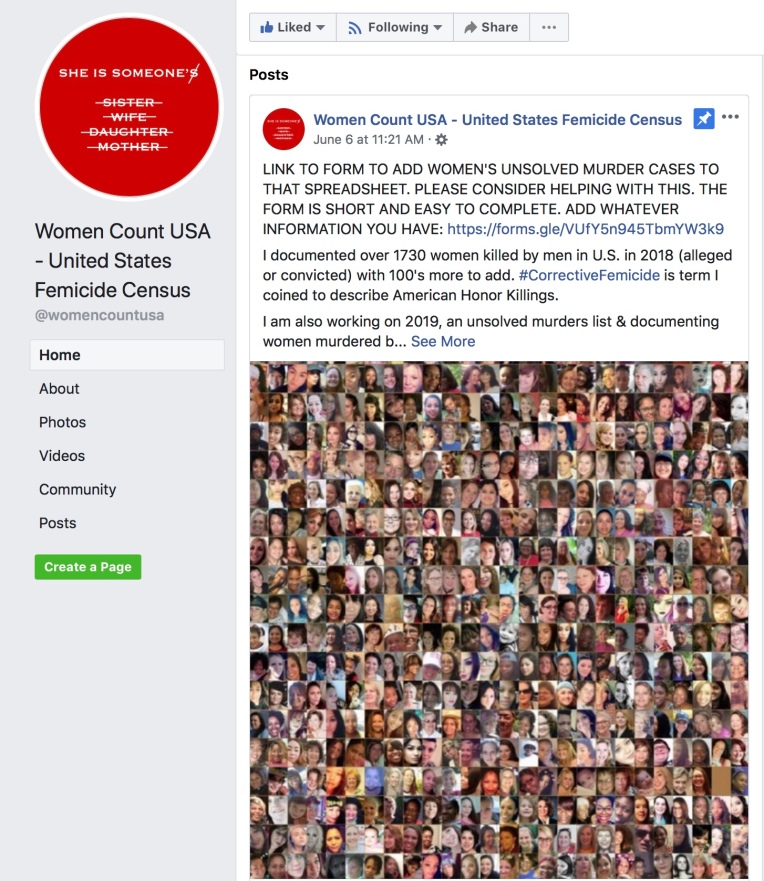 All of this is to say (you are still reading, thank you!)  that I spend several hours every morning sifting through data, reading individual stories, and reading experts’ opinions and analysis to try and understand what is happening in this country with regards to gun violence. Some days I am emotionally overwhelmed by what I read and learn, and I just want to take a nap. Some days I do. Two and a half years into these projects, and I don’t want to stop. I only have more ideas. I want to share my work with others, with hopes that we can learn how to save lives from gun violence.

Right now I am developing “Silenced: Domestic Report (this is an isolated incident with no threat to the public),” as a new mixed-media series that pairs the data of domestic gun violence incidents with a critical eye toward the images and language used in such reports. Much of the language is either clinical, naïve and/or irresponsible, and reinforces social, racial, and economic inequalities even though domestic violence crosses all demographics. How are these reports helping or hindering our understanding of the statistics, such as: more than two-thirds of intimate partner and family murder victims are committed with guns, and domestic violence assaults involving a gun are twelve times more likely to result in death. The “Silenced”series is evolving to utilize digital as well as historical print formats in the spirit of a “cultural jamming” artistic practice.

My problem now? Not enough hours in the day to do all the work that needs to be done. I am working on ways to be more efficient with the data collecting so I can spend more time on crafting the concepts to feature the information and the stories that are so vital to share. Even this explanation took several hours to write, several hours away from the other work. I thought it important to share just how invested I am in these projects, and how I am putting in the time and effort to understand how we as a country got to this place in time. In a perfect world, I would have shared this on June 7, National Gun Violence Awareness Day, but the stars, and the work, did not align.